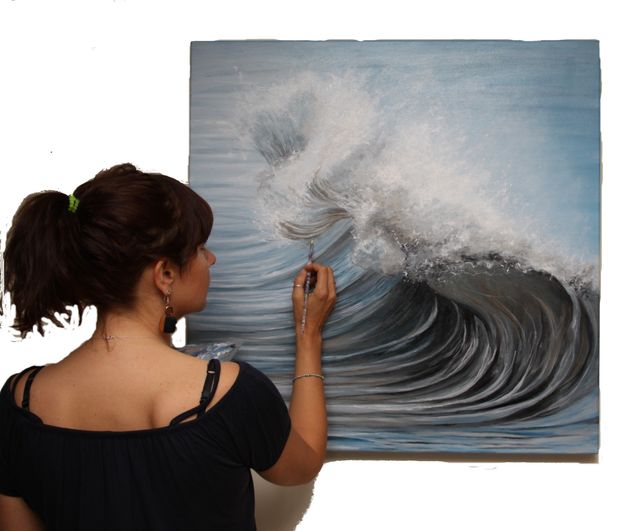 Oil Paintings inspired by the forever dance of the sea.
Living in a 200 year old cottage overlooking the sea in Caithness, in the far north of Scotland, I do not have far to venture to gather inspiration for my original oil paintings. I witness first-hand the many changing moods and seasons of the sea. Living and breathing the sea and living in such close proximity to it allows me to truly study the movement and light of waves as they crash on the shore below my house.

Initially from Sussex, I have been painting professionally since 2009. After university, I followed a corporate path into project management, but realised that I had so much more to offer the world in terms of my creativity, so in 2009 I gave up all mortgage ties and regular income to follow my creative passions. That path led me to Scotland in 2011 and I have never looked back.

I now run a successful creative business, but as the business grew I needed an outlet for my pure creativity and a way to express my love of the sea. Lisa McDonald Seascape Artist is a necessary outpouring of creative expression. Every wave painting that is created also comes with a message of hope, faith and courage to penetrate the turbulent and frenetic modern times that we live in, that uplifts and motivates the viewer.

I believe in the healing, calming, restoring and replenishing power of the sea having witnessed over and again the ability it has to bring people back to themselves.

I hope that my paintings will have the same effect on people as I endeavor to capture the ever changing beauty, grace and dance of the sea.
Next
Previous